Our first frost is threatening tonight. Say it isn't so! Now I know it's that time of year, but I'm always in denial right about now. I tell myself that the frost will magically pass me by. But eventually it arrives, and that's the end of my garden season till next year.
There hasn't been much new to look at in my garden for awhile. It seems like every day I'm taking more photos of the same zinnias, snapdragons, and dahlias. But they continue to delight me, so why not?
I've found that autumn light is extra favorable to garden photography. The low angle of the sun makes the light softer. I can hardly wait till the sun begins to set, so that I can run out and get more photos of my grasses glowing.
A few butterflies still pass through, which always delights me. Every monarch that comes through is photographed if possible, while sending them off with good wishes towards Mexico. 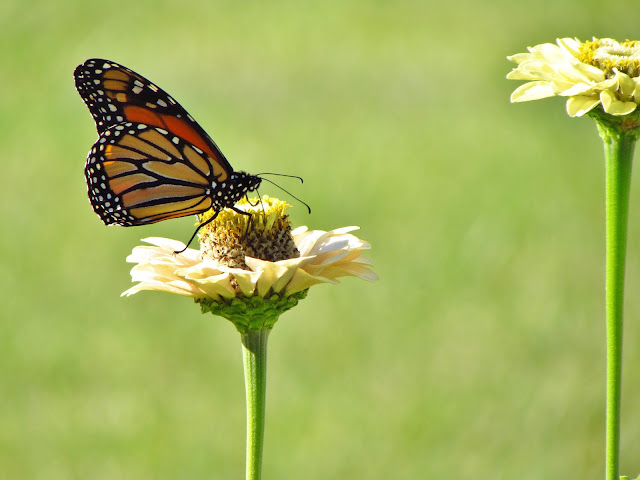 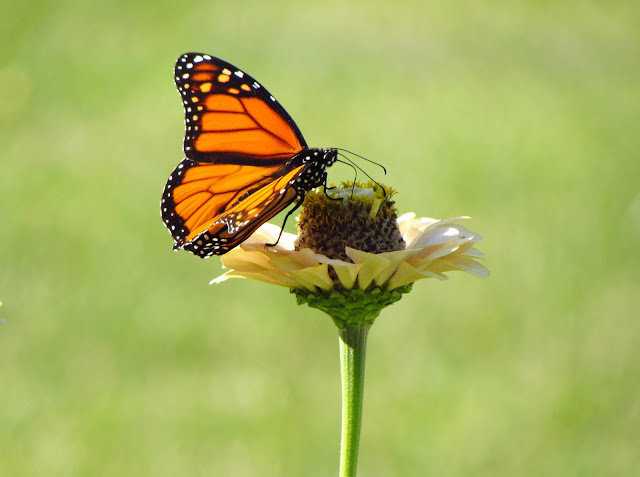 The roses have been revived by the cooler air. They tend to survive a few light frosts because the blooms are up above the ground. One year I had roses in early December, what a treat!
For reasons that I don't quite recall, we are having a late start with our fall color change. There's still a lot of green out there for mid October. After this frosty weekend ahead, we should really start to see some color out there. If you didn't look too closely, my garden looks almost summery. Almost.
Last year, I did a trial for Proven Winners, which was a lot of fun. The annuals are long gone, of course, but the perennials live on. This is Cinnamon Curls heuchera, and while it's pretty, it hasn't grown any bigger than when I first planted it a year and a half ago. Maybe next year it will put out some growth or flowers? Sure looks nice here in the tapestry of the other foliage nearby.
This PW is Sugar Shack buttonbush. It looks like the leaves will be putting on a show. But those same leaves are popular with leaf cutters of some kind, and I'm not sure how to fight that. If it's going to look like this all summer, what good is it? It gave me one "button" flower this year, but the plant itself has grown by leaps and bounds. I'm sure I'll see more blooms next year. The verdict remains out.
PW Little Quickfire hydrangea is a real beauty. Last year it had two flower heads, this year there are many more. I love the way the flowers start out white, then fade to pink and then dark pink. I've dried a few blooms for the winter, but didn't want to leave the whole thing bare by cutting anymore. I'm hoping that it will have so many flowers next year that it can spare a few more for me.
I was honored to find out that I took home honorable mention in Gardening Gone Wild's recent End of Summer photo contest! Do you think I should tell them that I didn't even use an SLR for this shot? 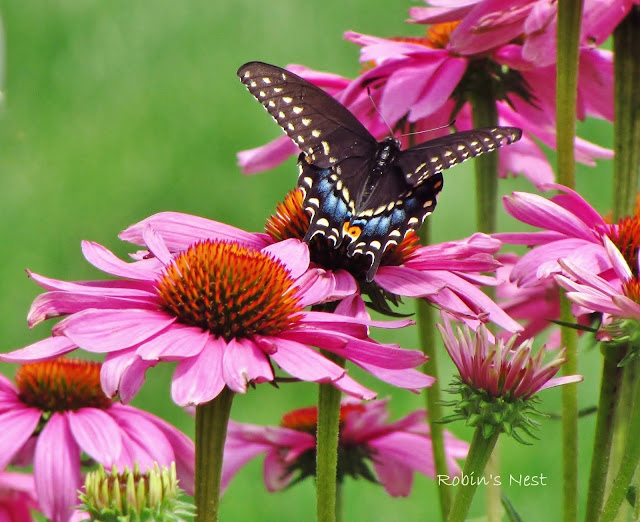 Let's all cross our fingers that frost stays away from my garden for a little longer, shall we? I just need a few more flowers to get me through winter.